This Vegan Sausage Gravy is super simple, incredibly tasty and a total crowd pleaser! You need to add this to your holiday menu!

Well, my friends, the day has finally come for a NEW vegan gravy recipe! I've honestly never felt the need to create a new recipe because my original vegan gravy recipe is a full proof hit! But if you feel like trying something new, then you need to give this gravy recipe a try!

The truth is that the base of this gravy is very similar to the old recipe, but the addition of vegan sausage makes this extra tasty! I went with my old standby - Beyond Meat Spicy Italian. It is my absolute favorite.

It crumbles well, it gets super crispy and it just tastes delicious! You can also sub your favorite vegan sausage!

How to Make a Roux

The truth about both of my vegan gravy recipes is that they are incredibly easy! I think that is what made the original recipe so popular. For very little effort you get a super delicious gravy - and if you run out at any point during your holiday dinner, it takes just a few minutes to whip up more!

Start out by crumbling and browning the sausage in a non-stick skillet. This just takes a few minutes. Remove the sausage from the skillet and melt some vegan butter in the same skillet. Slowly whisk in the flour. I like to do it a couple tablespoons at a time - just keep on whisking. Once the roux is smooth, bubbly and slightly browned, add in the poultry seasoning and pepper.

Now that the roux is smooth and bubbly, slowly pour in the broth. I used vegan chicken bouillon to make my broth. I think it has the best flavor for gravy. But...if you do the same, I wouldn't follow the bouillon to water ratio on the package. I think it is too salty when combined with the sausage. Instead, use 1 teaspoon of bouillon to 2 cups of water. You can always add more bouillon at the end if it isn't salty enough. Always better to add less in the beginning.

Pour in the broth a little at a time, continuing to whisk. Once the broth has been absorbed, add some more. After you've added the 2 cups of broth, you can decide if you want to thin it out more - this is a personal preference on texture. The vegan gravy will also thicken as it sits, so you can also wait to thin it out right before serving.

How to Serve Vegan Gravy

Stir in the reserved vegan sausage and give it a taste. This is when you can adjust the dry seasonings, add more bouillon or thin it out with more water/broth. Keep the gravy on low until ready to serve, stirring frequently.

If you made this Vegan Sausage Gravy I would LOVE to hear what you thought. Be sure to drop a comment and a rating below! You can also tag me on social media if you snapped a photo. I LOVE seeing your recreations! 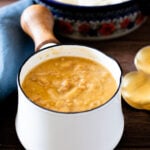 *FOR THE BROTH: I used vegan chicken bouillon mixed with water to make my broth. If you do the same, I would not follow the ratio the package instructions give of water to bouillon - it will be too salty with the addition of the sausage. I recommend doing about ½ the amount of bouillon - you can always add more bouillon to the gravy if it needs it. **You may want to add more water/broth to the gravy depending on your preferred texture. The gravy will also thicken as it sits, so you can thin it before serving if needed.