This Vegan BBQ Chicken Folded Wrap is inspired by the tiktok trend! A toasty wrap with avocado, pickled onions, a creamy sauce & vegan chicken. All in a compact tortilla you can take on the go!

Well, I'm just going to start this off by saying TikTok made me do it 😂 I might be too old for TikTok, but I can always get behind a fun, trendy recipe. And this wrap is a revelation. Everything folds up into the perfect triangle which makes it easy to fry up and take on the go.

So the basis of this whole trend is separating the tortilla into 4 segments. Each segment has its own ingredient and when folded up, makes one tasty wrap.

For my version of the wrap I picked some of my favorite wrap ingredients - vegan bbq chicken, avocado, pickled onions & cilantro sauce.

The vegan bbq chicken is just chopped vegan chicken, chives, green onion and store-bought bbq sauce. Throw it all in a bowl and give it a good toss.

For the cilantro sauce, we are switching things up AND keeping it light. Instead of vegan mayo, I used unsweetened vegan yogurt as the base. I also swapped out fresh jalapeño for pickled jalapeños. A little less spice and a little more tang. This sauce would be good on so many things - tacos, salads, bowls...anything!

How to fold this Vegan BBQ Chicken Folded Wrap

So the whole "thing" about this wrap is the folding technique. But let me tell you that it is beyond easy. Just grab a knife and cut a slit in the tortilla from the center down to the bottom. Now you have 4 easily visible quadrants.

Take your ingredients and add one to each quadrant - being sure not to overfill. Starting in the bottom left corner, fold up and work your way around clockwise. Now, you're going to be left with a perfectly folded wrap and can give it a quick fry.

How to serve this Vegan BBQ Chicken Folded Wrap

Heat some oil in a pan and fry the wraps until they are browned on each side. I'm sorry but there are no baking instructions for this. You need that crispy crust that you can only get with a pan fry. Now, you don't need a lot of oil, but it is the best way to cook these up.

When the wraps are crispy, cut them in half and serve them with a side of that cilantro sauce. Get to dipping! 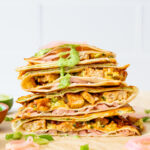 FOR THE CILANTRO SAUCE

*You can get the recipe here. This can also be swapped for raw onion. **Be sure not to put too much sauce - otherwise it will spill out as you are cooking. You can serve additional sauce on the side when eating.