I'll just say that TikTok influenced this Vegan Baked "Feta" Pasta. It was a viral recipe that is made even better by being vegan-ized.

Alright, I have another recipe under my belt where I can say that "TikTok made me do it"...if you missed my Vegan BBQ Chicken Folded Wraps, then be sure to check them out. It was my first TikTok recipe and it doesn't disappoint.

How to Make the Pasta

Ok, let's get one thing out of the way. There's no real feta OR vegan feta in this recipe. Instead I decided to use my favorite vegan cheese brand - Miyoko's. No other reason than it actually tastes good. I haven't tried this recipe with any other vegan cheese, and I wouldn't recommend it. This one worked perfectly.

While the "sauce" is cooking, cook the pasta and the spinach. When you're ready to finish it off, combine everything together with some vegan creamer and fresh basil. Add salt & pepper to taste and get to eating.

This Vegan Baked Feta Pasta is beyond delicious. This puts the original recipe from TikTok to shame 😉

If you made this Vegan Baked Feta Pasta I would LOVE to hear what you thought. Be sure to drop a comment and a rating below! You can also tag me on social media if you snapped a photo. I LOVE seeing your recreations! 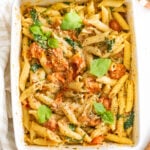 *I have not tested this with any other vegan cheese, so I cannot speak to the flavor/texture with anything else. **You can usually find this in the coffee creamer section at the store.