Get ready for your next party with these Potato Soyrizo Skillet Nachos with Chipotle Cilantro Sauce. Loaded with black beans, veggies and vegan sausage.

Nothing says football season like a big, towering skillet of nachos, right? And even if you aren't into watching football, I think we can all get behind crispy chips, roasted potatoes and a smoky chipotle sauce that will have you licking your fingers.

This is a recipe that will bring everyone to the table - and it can seriously feed an army.

How to Make Skillet Nachos

While your potatoes are roasting whip up your sauce by combining chipotle peppers, olive oil, vegan mayo, garlic, lime juice, salt, pepper and cilantro in a food processor or blender.

TSV TIP: I used my immersion blender. I am seriously obsessed with this thing and use it multiple times a week for sauces, dressings, soups.

Once your potatoes have done one round in the oven, add some additional seasoning, bell pepper, red onion and soyrizo to the baking sheet. Put it all back in the oven for another 15 minutes.

To assemble everything, add layers of chips, potato/soyrizo mixture, black beans and chipotle sauce to your skillet (or baking dish). Repeat until you have used up everything and place it the oven under the broiler for a few minutes.

Top it all off with more chipotle sauce, cilantro, avocado, jalapeño and lime wedges. Now...time to dig in.

Watch this video on how to make these skillet nachos: 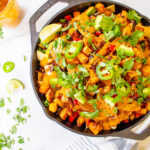 FOR THE CHIPOTLE CILANTRO SAUCE

*Be sure to add the chipotles and chipotle sauce a little at a time to make sure it isn't too spicy for you. **Reserve the remaining chipotle cilantro sauce for after baking.