Enchiladas are one of those staple meals I could eat once a week. There are so many options when it comes to filling and sauces.

The tricky part when making enchiladas vegan is getting a creamy texture without any cheese. And I've told you more than once about my lack luster feelings about vegan cheese.

Vegan Enchiladas are the best!

With both of my other enchilada recipes (Black Bean Green Chili Enchiladas and Vegan Enchilada Casserole) I used my Vegan Jalapeño Cream Sauce to get that creamy texture.

But I know everyone isn't as much of a spice addict as me. So I wanted to create a new recipe for people who want a more tame recipe.

But don't worry, there is still plenty of flavor going on in these bad boys.

And most of that flavor is coming from the avocado cilantro sauce. Grilled onions, fresh cilantro and creamy avocado are blended up with some spices to make a sauce that is to die for.

These enchiladas are hearty and healthy - perfect for meal prepping or a weeknight dinner! 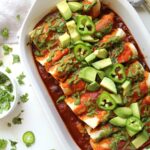 FOR THE AVOCADO CILANTRO SAUCE

FOR THE AVOCADO CILANTRO SAUCE

*You want the potatoes to be creamy, but you can leave some chunks for texture.