These Crispy Lentil & Mushroom Tacos are filled with a veggie combo, baked until crispy and served with a chunky guac and chipotle mayo.

It may not be Tuesday, but I can eat tacos any day of the week...and I do! These tacos come together super quick. The filling is a combo of mushrooms, lentils and seasonings. Corn tortillas are filled up, then baked in the oven until crispy. While the tacos are cooking, whip up a super rustic guacamole and a chipotle mayo spread. Weeknight tacos with BIG flavors!

How to Make the Taco Filling

To make the filling, add some red onion & diced mushrooms to a skillet with hot oil. Cook for 5-ish minutes. You want the onion to be tender and the mushroom to be crispy. Add in cooked lentils (I get mine in the produce section), a packet of taco seasoning and some water. Cook for a few more minutes.

If you think you don't like mushrooms, I encourage you to try these anyways - the mushrooms are so finely diced, you won't notice them. But you can also just do all lentils.

How to Assemble the Tacos

Steam some corn tortillas by wrapping them in a moist paper towel and placing them in the microwave for 30 seconds. Brush the tortillas with some oil and add a few tablespoons of filling. Gently fold the tortilla in half and place on a parchment-lined baking sheet.

If some of the tortillas crack, don't worry, they will still taste good. But just be sure not to press too hard when folding them to try and avoid this.

How to Make the Sauces

While the tacos are cooking, whip up a couple of sauces. I am calling this guac "rustic" because everything is roughly chopped and all of the seasonings can be adjusted to taste.

Cube a couple of avocados and place them in a bowl with a diced jalapeño, chopped cilantro, lime juice and salt. Give it a toss, give it a taste and adjust as needed. If you are sensitive to heat, you can add less jalapeño or omit it.

To make the chipotle mayo combine vegan mayo, chipotles in adobo and a splash of lime juice. Give it a mix, and you are ready to go.

How to Serve these Tacos

When the tacos are done serve them up with shredded lettuce, the guac and the chipotle mayo. I also like to add LOTS of cilantro and have some lime wedges on the side.

These tacos are so incredibly easy, but will definitely impress a crowd. The leftovers can be reheated in an air fryer or the oven. I even like eating the leftovers over a big bowl of lettuce and break up the tacos to make a salad.

If you made these Crispy Lentil & Mushroom Tacos I would LOVE to hear what you thought. Be sure to drop a comment and a rating below! You can also tag me on social media if you snapped a photo. I LOVE seeing your recreations! 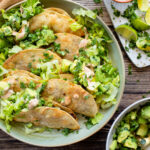 FOR THE CHIPOTLE MAYO

*I like to wrap the tortillas in a damp paper towel and place them in the microwave for 30-60 seconds.