This Vegan BBQ Bacon Pizza is better than any take-out I've had and a great dinner to make on a Friday at home. Layered with caramelized onions, tempeh bacon and a creamy sauce.

Pizza Friday is one of my favorite days of the week and this new recipe is easily at the top of my list. A crispy crust is layered with BBQ sauce, caramelized onions, my vegan cheese hack, tempeh bacon and lots of cilantro. This is a super fun (and tasty) pizza recipe that you will want to make on the regular!

How to make tempeh bacon

Tempeh bacon is super easy to make. Toss together some soy sauce, liquid smoke, sriracha, agave, tomato paste and garlic powder. Chop up some tempeh and toss it in the marinade. Transfer the mixture to a parchment lined baking sheet and cook it for 7 minutes.

You don't want to cook it longer than this - the tempeh will continue to cook in the oven once it is on the pizza.

Besides the tempeh bacon, the other star of the show is the caramelized onions. And the trick to good caramelized onions is taking it low and slow. They will take about 25-30 minutes to cook, but I promise, it will be worth it!

Add some oil to a pan with the onion and a pinch of salt. Cook them on low and keep them moving in the pan so that they don't burn. Once they start to get some caramel color, add a drizzle of agave (or maple syrup) and let them cook for a couple more minutes. They will get a nice golden color and taste amazing!

How to bring together Vegan BBQ Bacon Pizza

Spread out some pizza dough on a greased baking sheet and add some BBQ sauce. Top it off with the onions, vegan cheese (well, my vegan cheese hack - see the recipe for the details) and the tempeh bacon. Pop it in a very hot oven and cook for about 10-12 minutes.

Remove from the oven, slice it up and top it off with plenty of fresh cilantro. You could also add a side of vegan ranch if that's your kind of thing! 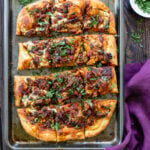 FOR THE CARAMELIZED ONIONS

FOR THE TEMPEH BACON

*You can usually find this in the coffee creamer section at the store. You can swap for non-dairy milk, but adjust the amount since non-dairy milk is thinner.  **The tempeh will look undercooked, but remember that it will cook again with the pizza.