This Vegan BBQ Chicken Pizza is made extra crispy and delicious by using a cast iron skillet. Top it off with vegan ranch and fresh cilantro!

So I haven't shared this on TSV yet, but if you follow me on Instagram then you know my latest obsession is cooking pizza in a cast iron skillet.

O-M-G you will not believe the difference this makes in your pizza.

Puffy crust on the top and the most brown, crispy bottom you have ever seen. It is literally the only way I like to make pizza these days. Ok, maybe not literally, but I can't get enough of it.

Now, I've shown you how to make vegan BBQ pizza with cauliflower in the past - if you missed it, you can get that recipe here. And if you aren't a fan of faux meats, then that recipe is definitely for you.

But, if you want to try something a little more traditional (and maybe freak out some of your non-vegan friends in the process), then I would give this pizza a shot.

For the "chicken", just use your favorite. I went with a Gardein chicken strip meal. I tossed out the sauce it came with and just used the chicken. I think using a non-breaded chicken is best for this recipe since you are going to cover it up in sauce before adding it to the dough.

Oh, and for the dough. I always use the pre-made one from Trader Joe's - it is cheap, easy and vegan. But you can always find another homemade recipe online and make your own.

Now the trick to getting your dough nice and crispy on the bottom, is slightly cooking it before it goes in the oven. And that is going to be easy because your cast iron skillet is already going to be hot from browning the chicken. Just add a little more oil and stretch your dough out across the pan. It will start to sizzle. While it's browning, add your toppings.

Throw it all in a very hot oven for 15-20 minutes then top it off with vegan ranch and fresh cilantro.

I swear no one will know this is vegan! AND, you are going to fall head over heals in love with this crust! 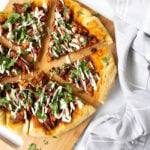