Spruce up breakfast or brunch with this Hummus Toast with Wilted Spinach & Tomatoes. A delicious combination of flavors that will take your toast game to new levels. 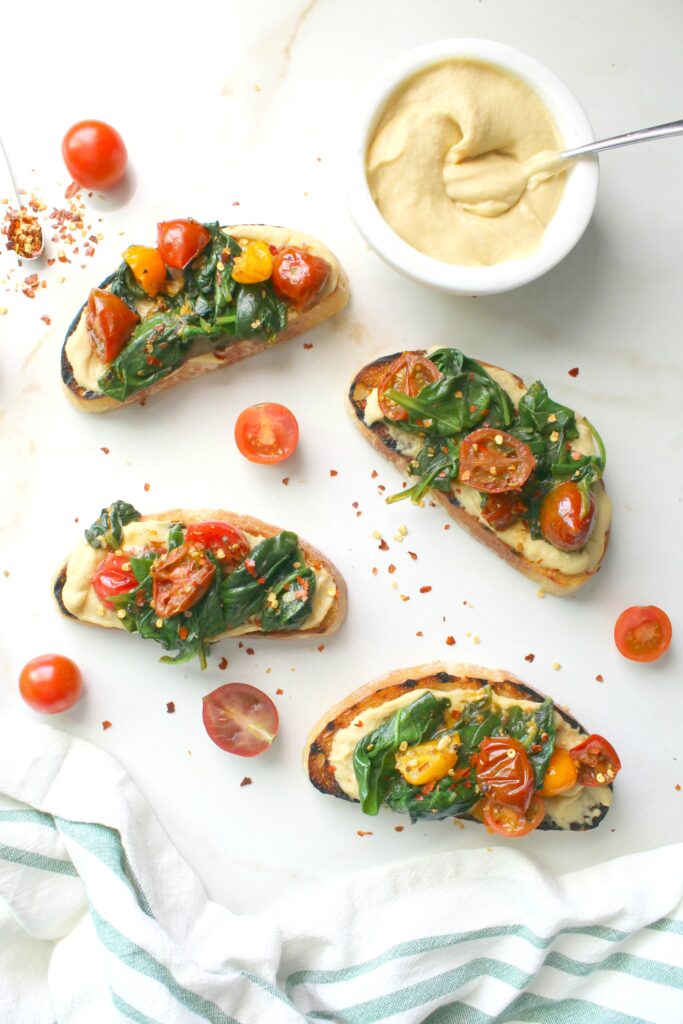 It's something we all know and love. But sometimes, we can get in a toast rut. You know, the same old thing day after day. But prepare to have a toast revelation, because today I'm bringing you something new to try that is going to get your tastebuds excited.

It sounds simple enough (and it really is simple to make). But the flavors you get from this toast are what make it special. 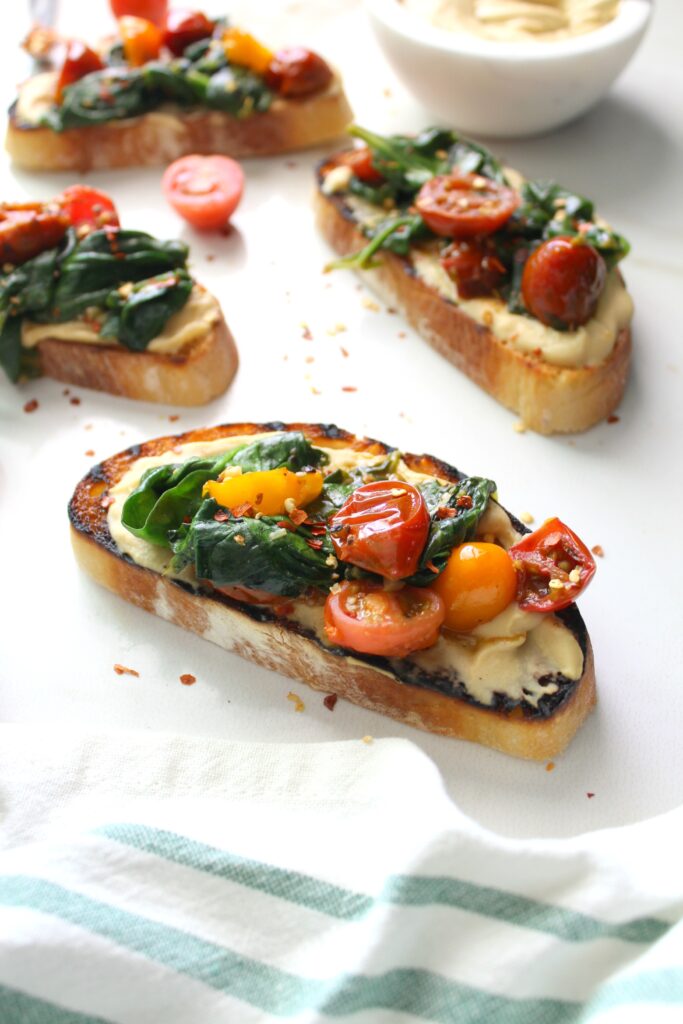 And per usual, we're going to start off with a little bit of olive oil and some fresh garlic.

Garlic is such an amazing ingredient. It just tastes so freaking good. Whether you roast it, fry it or use it raw, the flavor never gets old.

SIDE NOTE - did anyone else watch the Rotten documentary on Netflix about garlic? Who knew there was so much turmoil and politics within the garlic industry? Probably should have guessed - I mean, you can't escape drama when big money is involved. Anyways, back to the toast.

Once your garlic is sizzling, you're going to add in your tomatoes and let them cook down until they blister. Finally add a few HUGE handfuls of baby spinach (because you know that stuff wilts down to nothing) and some salt & pepper. Once the spinach is wilted down it is time to construct our toast.

TSV TIP: When it comes to bread, use your favorite. I opted for fresh slices of ciabatta. Ciabatta makes an amazing base for loaded toast because it is so dense, it can hold a lotta stuff. But again, use what you have on hand - you really can't go wrong.

The first thing we will add to our toast is a layer of creamy hummus. 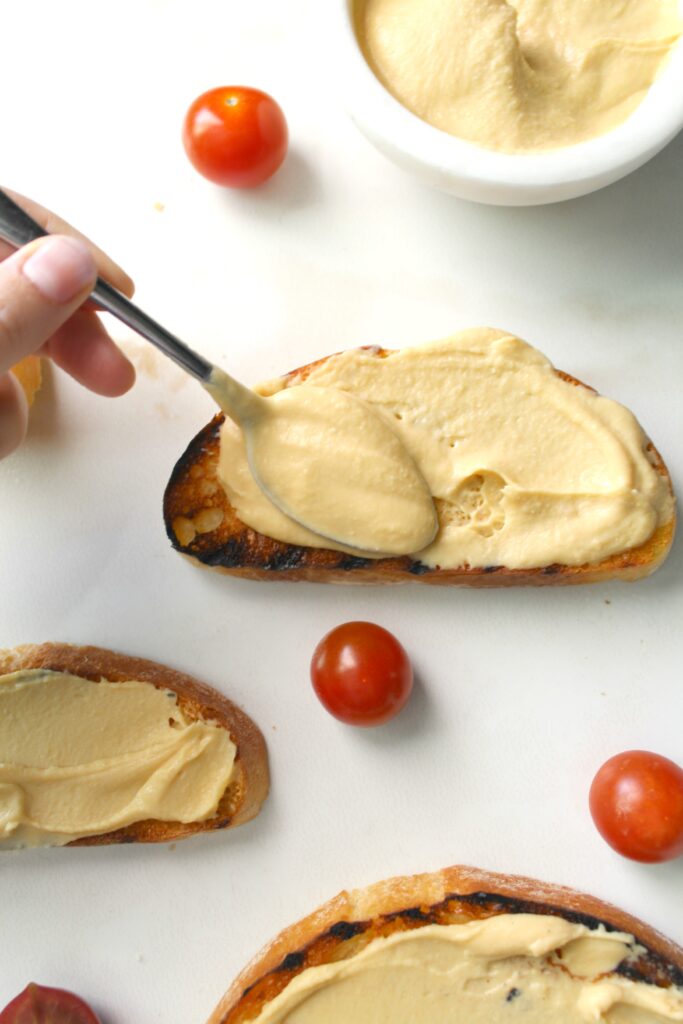 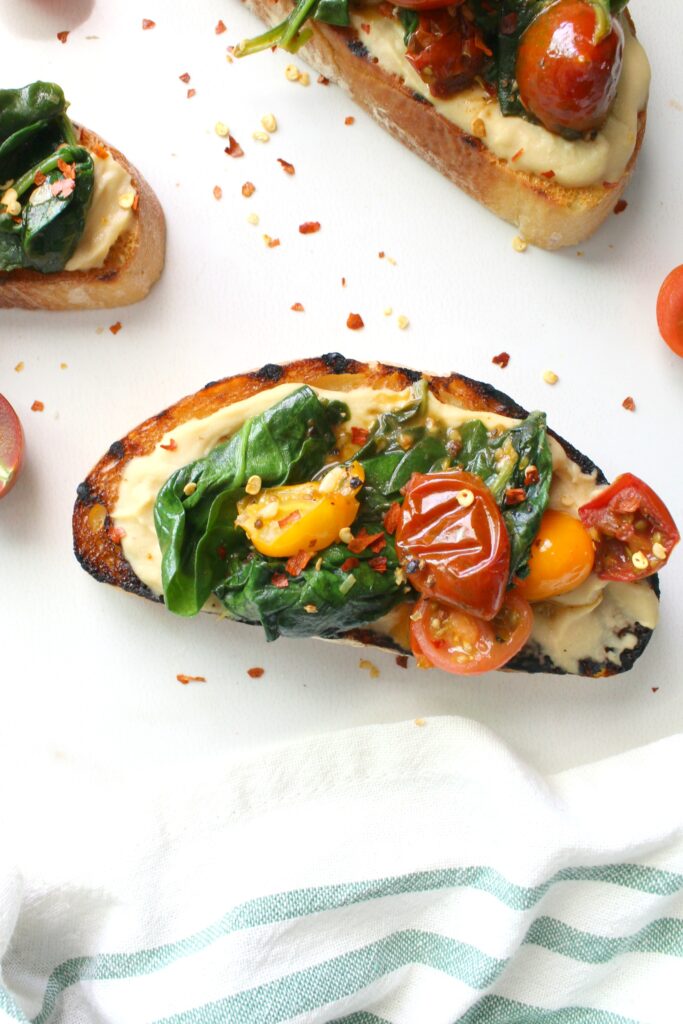 I decided to go with traditional plain hummus, but use any flavor. Roasted garlic, spicy, mediterranean - they'll all work with this recipe.

After you have sufficiently smothered your toast in hummus, load each slice up with the wilted spinach and tomatoes. Give it another hit of pepper (and maybe a sprinkle of red pepper flakes) and you are ready to stuff your face.

Guys, I could eat this toast everyday. It is a nice break from standard avocado toast and you can adjust the flavor each time you make it by swapping out the hummus you use.

Make this for breakfast, brunch or even a quick snack - you won't be disappointed. 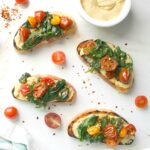